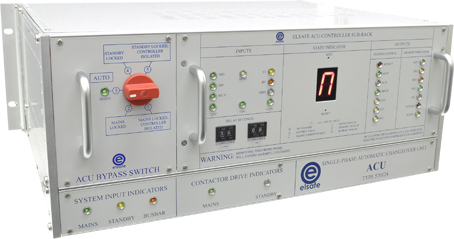 The ACU measures the Mains input amplitude, frequency, phase and current drawn as well as measuring the Standby supplies amplitude. If the Mains supply is disrupted, or its quality becomes unacceptable (outside of settable limits) then the ACU changes over and will switch Standby through to the load. The switch over is controlled by the ACU’s SmartELogic. This internal logic has been specifically designed in conjunction with the railway industry and is highly customisable to individual requirements. The switching voltages, and the timing of these changes to Standby supply and back, are also highly configurable. This complex logic has allowed the inclusion of features such as Hotspot detection. This system detects if there is a high resistance path on the Mains supply that makes it appear that the supply is in regulation however whenever any current is drawn the supply voltage drops. After testing for this situation four times the ACU permanently switches to Standby until it is reset by an operator. At a glance it is also easy to check on the state of the ACU and associated supply inputs, as the front panel LED’s indicate the condition of all ACU inputs and outputs, as well as a 7-segment State Indicator that displays the SmartELogic state. 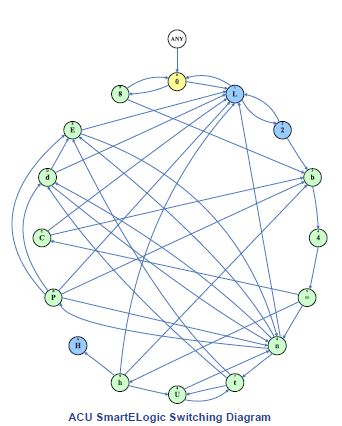 An external bypass switch on the front panel allows a local operator to take control of the system away from the ACU and enable locking down to either Mains or Standby – particularly useful during servicing and maintenance. The ACU also has a backup watchdog system that reacts to any abnormal system outputs scenarios. Once an abnormal system state is detected the local and remote alarms are set and as a precaution the Standby supply is switched through to the Mains. As an aid to system fault-finding, the Watchdog scenario can be identified by the flashing of seven dedicated internal LEDs. A Remote Facilities plug allows monitoring by telemetry of the present states of the Mains, Standby and Busbar voltages as well as the operating state of the ACU in terms of which of the inputs is presently supplying the load. Signals indicating the states of the Watchdog alarm and an internal High Temperature alarm are also presented on the Remote Facilities plug.   ACU Typical System Installation 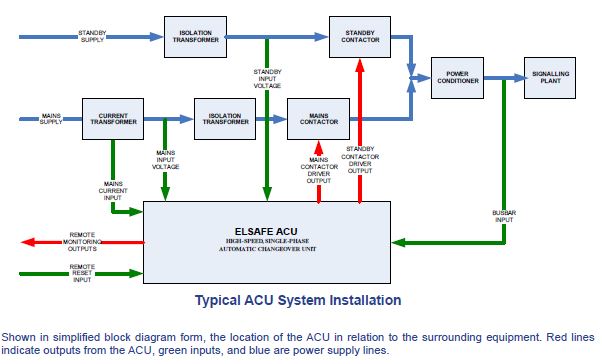 Why is an ACU needed?

The power supplies of all electrically-operated railway signalling systems are prone to disruption, whether by lightning strike, electrical system failure or supply disruption. Uninterruptible Power Supplies (UPS) don’t provide cost-effective protection given that the loading of a signalling system will typically exceed 40kVA, and outages may last days. Many railway authorities opt for supplying their signalling systems primarily from nearby street Mains services, while backing-up using a Standby supply, often derived from their own traction supply system.

In the past, Mains and Standby sources would have been monitored by an electro-mechanical changeover system (also known as an ECO panel) which switched the Standby supply into service after the street Mains supply had gone down. Presently-deployed electro-mechanical changeover schemes typically aren’t quick enough to prevent connected systems from responding to a break in supply that would result from such a changeover. Typical connected signalling equipment and relays require a break of no more than 70ms in order to maintain function. ECO switching time will vary depending on the nature of the power failure and can’t guarantee the 70ms minimum holdover time that typical connected relays or other signalling equipment can sustain. In a suburban commuter network for instance, the resulting dropping-out of such relays would restore cleared signals back to red which would in turn cause approach-locking requirements to impose delays before the affected route could be re-cleared.

This website uses cookies to improve your experience while you navigate through the website. Out of these, the cookies that are categorized as necessary are stored on your browser as they are essential for the working of basic functionalities of the website. We also use third-party cookies that help us analyze and understand how you use this website. These cookies will be stored in your browser only with your consent. You also have the option to opt-out of these cookies. But opting out of some of these cookies may affect your browsing experience.
Necessary Always Enabled
Necessary cookies are absolutely essential for the website to function properly. This category only includes cookies that ensures basic functionalities and security features of the website. These cookies do not store any personal information.
Non-necessary
Any cookies that may not be particularly necessary for the website to function and is used specifically to collect user personal data via analytics, ads, other embedded contents are termed as non-necessary cookies. It is mandatory to procure user consent prior to running these cookies on your website.
SAVE & ACCEPT